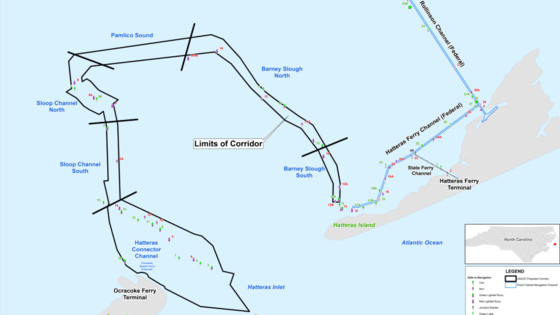 The realignment of the Rollinson Channel within Hatteras Inlet has been approved, allowing for federally funded dredging to occur throughout the entire horseshoe route in Hatteras Inlet.

An Environmental Assessment and Finding of No Significant Impact (FONSI) was signed on November 30, 2022 by Robert M Burnham, LTC, U.S. Army, acting district commander for the Wilmington District of the U.S. Army Corps of Engineers (USACE). This will allow maintenance of the horseshoe route by shallow draft dredges between October 1 and March 31, except for Sloop Channel North and Hatteras Connector Channel, which can now be maintained any time of the year.

Throughout December 2022, the Merritt—a sidecaster dredge operated by the U.S. Army Corps of Engineers—will dredge the Rollinson Channel and Connector Channel to reduce the shoaling that has occurred within Hatteras Inlet.