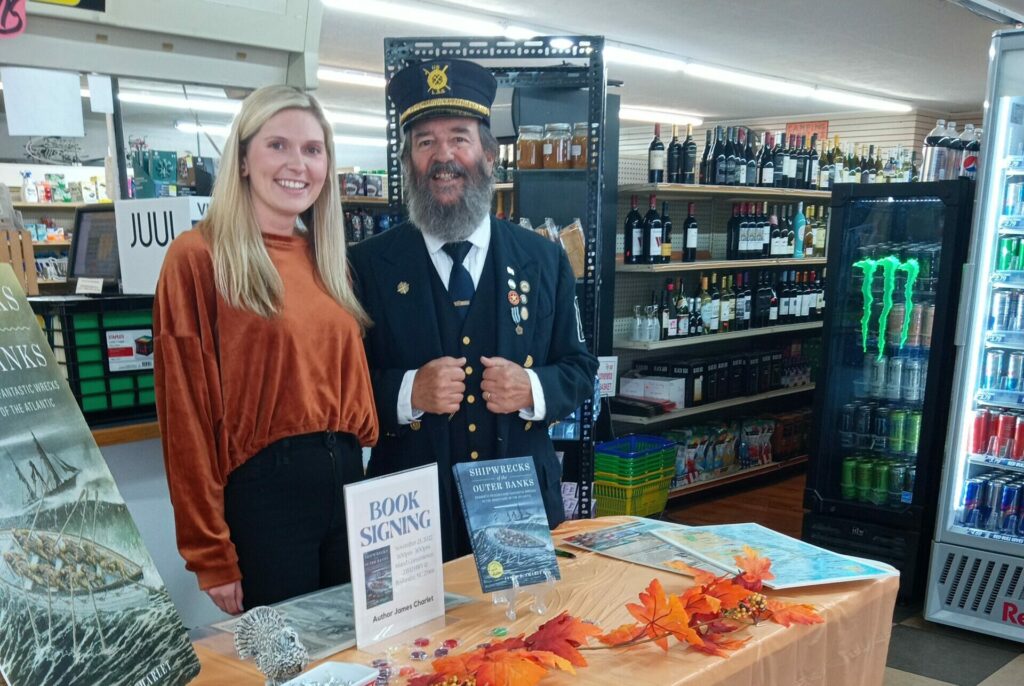 Keeper James said, “Myra Caldwell, Island Convenience Assistant Manager and Buyer did such a fantastic job for us in November, due to that success of the ‘Thanksgiving Season,’ we are doing another seasonal book signing!” Keeper James Charlet again will be autographing and personalizing copies of his best-selling book, Shipwrecks of the Outer Banks: Dramatic Rescues and Fantastic Wrecks in the Graveyard of the Atlantic, Globe Pequot Press. Keeper James says, “This is primarily about the dramatic rescues by the surfmen of the United States Life-Saving Service, who I call ‘America’s Forgotten Heroes.’ This is our local ‘Christmas Season’” event.

The book is being sold world-wide. “That’s why I think it is so special to sell it here in my “home village.”

The United States Life-Saving Service is one of the least-known yet most inspirational aspects in all of American history. It operated on all of America’s coasts from 1871 until 1915. In that year, it was merged with the U.S. Revenue Cutter Service (born 1790) and renamed the United States Coast Guard! But the singular mission of the Life-Saving Service was saving lives in peril of the sea. During their 44-year history, nationwide, using no more than small, open, wooden boats and cork life belts, most often in violent and dangerous storms, they responded to over 178,000 lives in peril from shipwrecks…of which they saved, OVER 177,000; yet, somehow, America forgot these peaceful heroes. Keeper James continues, “My mission and my passion is to not let America forget about this incredible history of real heroes. That is what my book is all about. And this is just the first!” James has completed a 27-chapter Volume II sequel and is preparing to submit to his publisher.

“Island Convenience has everything else you could want, so it is a great stop!” Charlet concludes. “I can do this because I live close by, and these are wonderful people. Hope to see you there.”