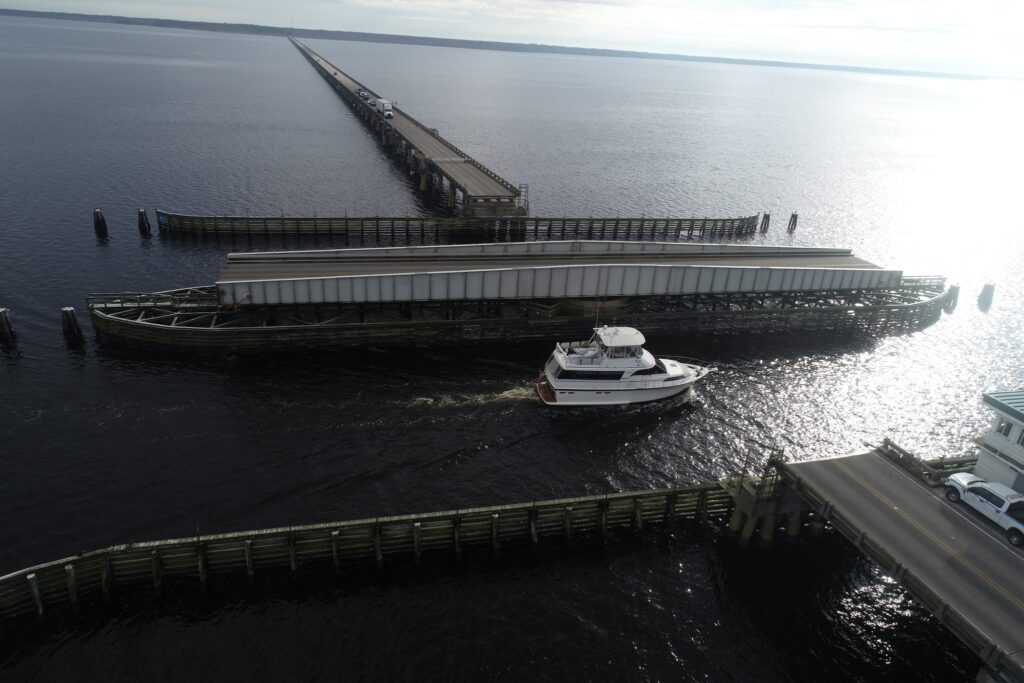 A replacement for the 60-year-old Alligator River Bridge on U.S. 64 between Tyrrell and Dare counties is a step closer to reality.

The proposed $268 million project will receive a $110 million federal Multimodal Project Discretionary Grant from the U.S. Department of Transportation.

“This bridge is a lifeline for the people of North Carolina both to and from the Barrier Islands. It is one of the few options residents and visitors have for accessing our far eastern counties and this bridge replacement will serve our state for decades to come,” said North Carolina Governor Roy Cooper. “This is a great example of how President Biden’s Bipartisan Infrastructure Law helps move along large projects that otherwise would be difficult to fund through traditional means.”

The current Lindsay B. Warren bridge is a two-lane swing-span bridge that was completed in 1962. More than 4,000 boats pass through the area every year, forcing vehicle traffic to stop while the swing-span opens and closes. Though maintained, the aging structure experiences occasional technical issues that can force motorists onto a 99-mile detour.

“This is a big boost for eastern North Carolina,” said Win Bridgers, Division One Engineer for the N.C. Department of Transportation. “A new fixed-span bridge over the Alligator River would aid everything from economic development to hurricane evacuation.”

The proposed replacement project would build a new two-lane fixed-span bridge just to the north of the old one, allowing both marine and vehicle traffic to pass unimpeded. NCDOT is planning for construction to begin no later than 2025.

NCDOT applied for the federal grant in May. It named its application STERLING (Strengthening Transportation Evacuation Resilient Lifeline by Improving the Network’s Grid) in honor of former Division 1 Engineer Sterling Baker, who passed away in April.

“Sterling dedicated his life to NCDOT and the northeastern North Carolina community. He would be proud the grant project for this bridge would highlight his work ingenuity and character he showed to get the job done for citizens,” said Baker’s wife, Elizabeth Mumm Baker. “It is really special, and his family will be honored that he will forever be part of eastern North Carolina. Thank you for this tribute honoring his legacy.”